I’m going to be honest with all of you: I’m very nervous about these next two eclipses. My anxiety has very little to do with the stars, however, and much more to do with my own experience. Within the past two years, the weeks leading up to and following the eclipses have wrought havoc on my life. I saw the end of multiple homes, friendships, romances, communities, jobs, and even the car I had once lived out of and traveled around the country with. Whatever was whittled down by one eclipse was hit like a wrecking ball by the following one, finally bringing down what the last cycle failed to strip away, or rather, what I refused to let go.

To say that these past couple of years were transformative would be an understatement… it wasn’t just life phases that ended. I envisioned so many futures in many places with different people; only to watch them slip away like sand between my fingers. I was so desperate to hold on to scraps of what was, that it took multiple cycles before I really owned that all these places, people, and things were no longer aligned with me. Each instance was about as disorienting as waking up from a dream in which you lived a lifetime as someone else. It was excruciating, and frankly, the most pain I’ve experienced since my spiritual awakening (which I had previously thought made me immune to that amount of despair). Of course, I was ultimately brought to my line of work today. I actually cemented by knowledge of tarot while seeking guidance for myself during all of this transition. In fact, by pure synchronicity, it was the week of the lunar eclipse at the end of January when I started posting my general readings.

I’m knocking on wood as I type this, but I finally feel like these eclipses will lighten the impact they have on my life. Why? Because for the first time I intrinsically care about the work I am doing to sustain my livelihood. While I maintain no illusion that working as a psychic tarot reader is all I will ever want out of my life, it has been an important step in claiming who I am and what I offer the world. Our eternal aspect seeks integration with our temporal selves, which we either find in physical life or return to upon death. While the universe conspires to help us meet the prerogative of our higher selves, it does not perceive it as “wrong” to not embody your purpose, as your purpose was essentially a choice you made prior to coming here—not one that was chosen for you. There is an urgent need to shift from the belief that we are “punished” for not living up to our potential and recognize how much we are being assisted towards realizing it, even as we struggle to survive and our world is dying.

Purpose is literally the feeling of your soul rushing through your entire body. When we live a life that is out of alignment, we greatly restrict the amount of life force that can flow through our bodies… it is an act of energetic suicide. Our sense of purpose is very unique. For example, purpose for one person can come through parenting, whereas another person would find child-rearing to be an immense burden. Purpose also expands or evolves with us the more we pursue it; which is why a person who is committed to living with purpose will truly live many lives in one.

Cancer is associated with the fourth house or Imum Coeli (IC) which not only represents our sense of family, home, lineage, and upbringing; it also whispers of the innermost self. Designated as the point in the sky that is directly beneath us at the exact time and place of our birth, the Imum Coeli refers to who we are at deepest part of our being, which is why in the mundane reality it pertains so much to our conditioning in early childhood—most of our deeply ingrained beliefs and behaviors are the byproduct of our upbringing. This upcoming solar eclipse in Cancer urges us to return home–to who we truly are deep down–whereas the Capricorn lunar eclipse will rouse a deep desire to achieve and find our place in the world.

Of course, I generally find it helpful to think of the sign as the “what” and the house as the “where,” so if you really want to figure out how this eclipse will personally affect you, I would confer to your specific natal chart to find out where the 10th degree of Cancer (which is the placement of the eclipse) falls for you.

Before we get to the astrological forecast, I will disclaim that this forecast is very general. I highly recommend that you refer to the transits in your own natal chart to really understand how these planetary movements will translate in your life personally. Anyways, without further ado, here are my notes for July 2019: 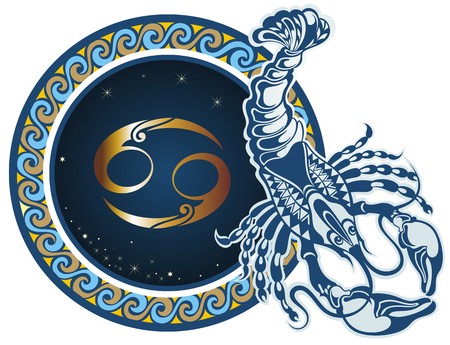 Happy Cancer season! Leo season commences on July 23rd. July may be one of the most astrologically significant months of the year with two eclipses, five retrograde planets, and four oppositions with Saturn and Pluto in Capricorn.

– Mars enters Leo on July 1st. A roaring lion comes to mind with this transit. Mars ignites in a big, dramatic way as it moves through the fiery Leo. With all the activity through Cancer (especially the eclipse) there is an impulse to purge these emotions in histrionic or spectacular displays. Conflict has the potential to get a bit “over the top,” but can also help those who lack a strong sense of self own their worth.

– New Moon in Cancer conjuncts with Sun and forms a total solar eclipse on July 2nd. As the shadow of the Moon dances with the light of the Sun, what has been hidden (the new moon) comes into sight. Luna finds herself at home in her native sign of Cancer. A time of heightened sensitivity and intuition. A serious emotional detox. Those who are trying to develop their psychic and intuitive abilities should really draw upon this energy through ritual or energy work.

– Venus enters Cancer on July 3rd. An almost child-like innocence relative to love, Venus takes on a very sweet quality in Cancer. Ruled by the moon, the fluctuating nature of Cancer stirs longings for comfort, stability, commitment, and domestic bliss. Even the most outgoing and extroverted personalities might find themselves seduced by the idea of spending a romantic evening in, complete with a movie, wine, and home-made meal.

– Sun in Cancer opposite Saturn in Capricorn on July 9th, trines Neptune in Pisces on July 11th, then opposite Pluto in Capricorn on July 14th. So far this year, Saturn and Pluto in Capricorn have really been pushing many of us to become our best and brightest selves… by testing our limits. I sense that July is going to throw salt in our wounds and beliefs regarding our parents and parenting. Cradle the child within you and become parent to yourself. The Sun-Neptune trine may shine some insight, however, that alleviates some of this strain—especially through dreams. Neptune also provides an opportunity for healing.

– Full Moon in Capricorn forms a partial lunar eclipse on July 16th. Stirs a deep desire to achieve and find one’s place in the world. A good time to let go of whatever holds you back from career or academic excellence.

– Venus in Cancer opposite Saturn in Capricorn on July 17th, then opposite Pluto in Capricorn on July 21st. Relationships are going to be tested in big ways, with lots of “make or break” conflicts coming to the surface. Remember: it’s not only possible to have yourself and your partner, it’s necessary to truly relate to someone. Beware of black and white thinking relative to romance and wealth.

– Mercury enters Cancer on July 19th, then conjuncts Sun on July 21st. A little thoughtfulness before speaking may go a long way in reducing problems during this transit. Although with Mercury being retrograde, there may be a few instances of accidentally hurt feelings despite your best efforts. Trust that Mercury drives us into communicating what needs to be said, even if it appears to be a roundabout or outright backwards way of getting there. Retrograde Mercury conjunct with the Sun offers a moment of internal clarity or major realization.

– Sun enters Leo on July 23rd. Leo season is a time of pleasure and relaxation before the work and harvest of Virgo season. The Sun finds itself warm and bright in its native sign Leo.

– Mercury conjuncts Venus in Cancer on July 25th. A great time to express how you really feel to a special someone. Displays of affection, confessions, and commitments abound. Mercury retrograde is notorious for bringing back people from the past, and this conjunction may very well bring an old lover back into your life to tie up lose ends.

– Venus enters Leo on July 28th. A spell of passionate romance and larger-than-life creativity. Luxurious Venus in the royal sign of Leo also tends to be rather showy and demanding the best quality of things—whether that be dining, fashion, or possessions.

– Mercury goes direct in Cancer on July 31st. Some tears may be spilled, but in this case, it’s most probably not a bad thing. Sometimes miscommunications or misunderstanding come to light in the post-shadow phase, especially in a water sign like Cancer, where it can be so easy to get caught up in your own emotions that you don’t even realize you’re not on the same page as someone else. Still, expect to have some heart-to-heart conversations in the following week or so, especially if there was conflict earlier in the month.

4 thoughts on “Many Lives in One, Eclipse Season, & Astrological Forecast: July 2019”